Tribute bands have the look and the sound but not the price. 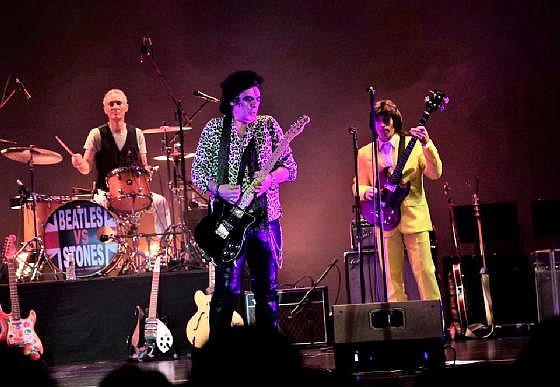 Stones tribute band 'Satisfaction,' is coming to the Birchmere on April 8.

There’s only one rock god that struts around on stage, wrapped in the Union Jack, singing about girls named Angie, or Ruby Tuesday. And then there’s Christopher LeGrand, the singer in the Rolling Stones tribute band “Satisfaction,” who takes on the persona of Mick Jagger when they play at Birchmere on April 8.

To get the Mick Jagger look down, LeGrand spent six months watching videos, long before YouTube, and worked on the songs and singing 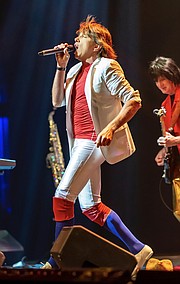 Christopher LeGrand becomes Mick Jagger when they hit the stage.

mannerisms. “Having the looks or moves wouldn’t mean a thing if I couldn’t nail that down first,” LeGrand said.

Their full name is "Satisfaction/The International Rolling Stones Tribute Show." LeGrand is the engine behind the band, and he has a business degree. LeGrand is joined by Dom Lanzo as Keith Richards, Jimmy Babu as Ron Wood, John Wade as Bill Wyman and Joe Rotondo as Charlie Watts. The band performs 150 shows a year.

To be in a tribute band of the Rolling Stones, a musician can’t just learn the licks on any one guitar or drum set. According to LeGrand, “our key for any joining member has always been authenticity with all details studied and covered. Look, sound and attitude.” He seems to have it all covered.

They do three different versions of a Stone’s show, including the competition-like show with the Beatles, a show called “Sympathy for the Devil,” where they are accompanied by an orchestra, and “Gimme Abbey,” a play on the 1969 period where the Stone’s and the Beatles rocked the world.

Their song list is long, like the Rolling Stones, who have been around since the early 1960s, challenging the Beatles along the way for the title of the “world’s greatest rock and roll band.” Satisfaction delves into that Beatles competition with their own challenge called the “Beatles vs the Stones from 1965.” In the showdown, they’re up against a Beatles tribute band “Abbey Road.” Although the real bands never performed on stage together back in the day, this dabbles with “what if.” Satisfaction describes it as “A one night show featuring the two biggest rock & roll bands of all time on stage together.”

Touring in a Rolling Stones tribute band is bound to have its moments too. According to LeGrand, they've seen some interesting people. "We had one guy tell us he took the fall for Keith back in the day and went to prison for 10 years on a drug charge," LeGrand said. "Claims he gets tickets to shows for life," he added.

And then there's things he puts in the 'interesting,' category. "We get shown all the tattoos people have with some in very private places," LeGrand said.

Satisfaction has been all over the country and world, collecting rave reviews along the way. In Las Vegas, they "Shined just like the real Stones on the strip," one review said. Showbiz Magazine said, "They have you in the aisles like Jumping Jack Flash." After their Birchmere show, they are performing in Virginia Beach, Oklahoma, Texas and Arkansas.