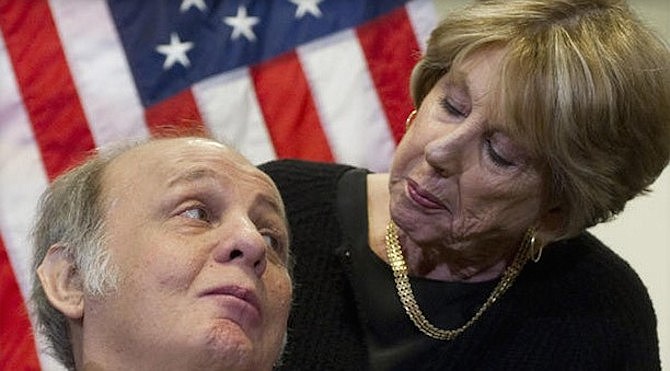 Gun control activist Sarah Brady, shown with her husband Jim Brady, was raised in Alexandria and taught elementary school in Old Town during the first years of integration. Photo contributed

Why not recognize our teachers and rename the Maury Elementary School for a former Alexandria Elementary Public School teacher who gained national prominence promoting public safety for all Americans? This would be inspirational to both our teachers and students.

The Alexandria School Board has a momentous opportunity to recognize and demonstrate its respect for the extraordinary achievement of a former Alexandria student and Alexandria elementary school teacher, the late Sarah Brady. Her remarkable leadership was largely responsible for President Clinton signing the “Brady Bill” into law.

Following the shooting of her husband, President Ronald Reagan’s beloved Press Secretary Jim Brady, Sarah Brady led an extraordinary national effort to protect all 330 million Americans from handguns being obtained by individuals not legally permitted to own them. This legislation did not inhibit the rights of anyone, it simply imposed a “three day waiting period” while a background check could be completed to ensure the purchaser met the legal requirements to own a handgun.

Because of the ferocious opposition of special interests on Capitol Hill, the well-funded National Rifle Association, and various state and local groups, Sarah led an exhaustive campaign over seven years, six Congressional votes, and three Presidencies, which culminated in the passage into law of the Brady Bill.

This legislation enhanced the personal safety and lives of all Americans, regardless of race, creed, color, gender, age, or economic circumstances. It only impinged on the supposed Constitutional rights of those needing a handgun to shoot someone within three days.

Before gaining international recognition, Sarah Brady grew up in Alexandria’s Parkfairfax section, graduated from George Mason Elementary and Francis Hammond High School, and earned a Degree in Elementary Education from William and Mary.

She began a four-year teaching career in Alexandria at the ACPS Ficklin Elementary School in north Old Town during the first year of integration. She experienced ugly demonstrations and threats to her personal safety while many of her students from the public housing projects vowed “we will protect you” as she manifested her support of racial justice.

The renaming of Maury School for a former ACPS student, an ACPS elementary school teacher, a modern woman who achieved extraordinary national prominence to enhance the personal safety of all Americans while caring for a paralyzed husband and raising a school aged child traumatized by his father being shot, is an unparalleled success. This success could be transformative to both our teachers and school children.

To recognize the remarkable leadership of the leading spokespersons for Handgun Control from 1989 until 2012, the organization honored Sarah and Jim Brady by renaming as the “Brady Campaign to Prevent Gun Violence.” Sarah and Jim then enjoyed their final years of retirement at Goodwin House in Alexandria where they were often visited by then Vice President Biden. Their wit and personality made them favorites among the professional staff and residents at Goodwin House.

Show your support to our School Board by mail to: ACPS School Board, 1340 Braddock Place, Suite 610, Alexandria, Va. 22314 or via email to Superintendent of Schools Dr. Gregory C. Hutchings, Jr. at superintendent@acps.k12.va.us.