“Every Memorial Day we honor our past Commanders who are buried in this cemetery.”
Votes

“Every Memorial Day we honor our past Commanders who are buried in this cemetery.” 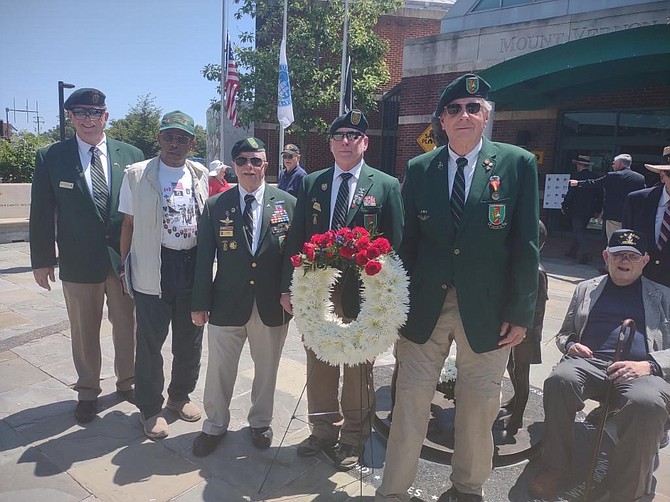 Members of Special Forces Association Chapter XI, who assisted in the May 30 Memorial Day Ceremony at the Captain Rocky Versace Plaza and Vietnam Veterans Memorial, gather for a group photograph at the statue of Rocky Versace. Photo by McArthur Myers

Alexandria paid tribute to its fallen veterans May 30 with Memorial Day ceremonies at Alexandria National Cemetery and the Captain Rocky Versace Plaza and Vietnam Veterans Memorial in Del Ray.

In Del Ray, the names of Alexandria’s 68 fallen and missing in action service members from Vietnam were read aloud as part of the annual ceremony at the site named for Medal of Honor recipient and Vietnam POW Humbert Roque “Rocky” Versace.

"The Friends of Rocky Versace are grateful for the support of both the Del Ray and greater Alexandria communities for the wonderful turn-out on a bright, hot morning,” said master of ceremonies Kevin Rue, a representative of the organization that hosts the ceremony. “It is wonderful to see Alexandria's 68 Vietnam War fallen heroes remembered by those who took time out of their long weekend to attend the ceremony."

The ceremony included a wreath laying by nine members of Versace’s West Point class of 1959 and was attended by several Gold Star family members. Two Gold Star widows of Alexandria’s fallen, Reba Bayliss, widow of Capt. Paul M. Bayliss, and Bette Spengler Meuleners, widow of Capt. Henry Spengler, took part in the Ceremony, reading their Fallen Heroes' names during the Reading of the Names portion of the Ceremony.

American flags were placed at each of the headstones in the cemetery with six wreaths bearing the American Legion insignia marking the site of past Post 24 Legion commanders.

“Every Memorial Day we honor our past Commanders who are buried in this cemetery,” said Post 24 Commander Henry Dorton. “We also place a wreath at the site of the Unknown Union Soldier Memorial.”

F. Clinton Knight is one of the past Legion Commanders buried in the cemetery.

“F. Clinton Knight was commander in 1925 and 1926 and was instrumental in saving the Gadsby’s Tavern building,” Dorton said. “At the time there was a huge controversy about saving the building or funding a memorial to local World War I veterans but Clinton felt that the connection to our Founding Fathers was more important and worked to save Gadsby’s.”

Alexandria National Cemetery is one of the country’s original national cemeteries established in 1862. By 1864, it was close to capacity, leading to the development of Arlington National Cemetery.

“I am thankful that we were able to be back at our usual site for Memorial Day for the first time in two years,” Dorton added. “The American Legion has a long history of our Memorial Day observance there and I am happy with the turnout and respectful public support.”