“I want to let kids know there is another way out. If you dream big you can get there.”
Votes

“I want to let kids know there is another way out. If you dream big you can get there.” 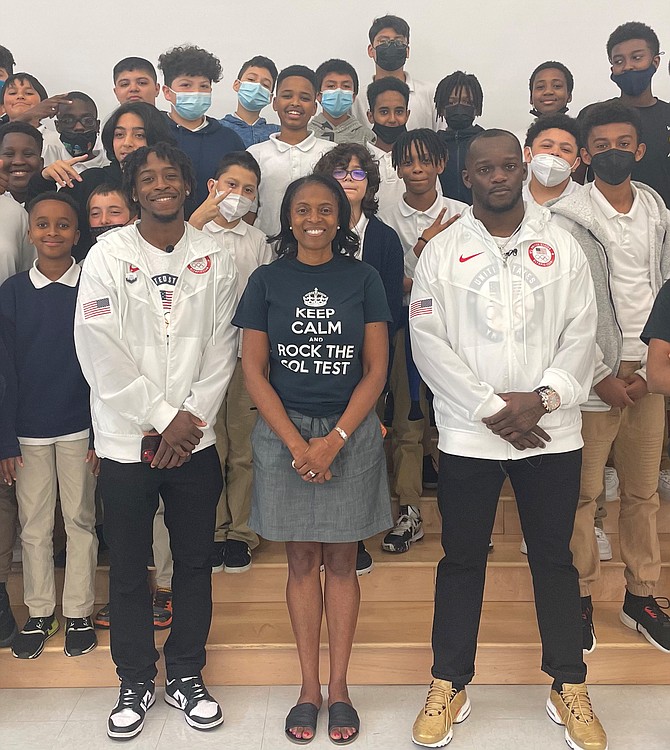 Students filled the school cafeteria as the duo talked about their road to the elite of the boxing world.

“I am from the projects on Madison Street and used to get in fights after school every day,” said Isley, who attended Lyles-Crouch Traditional Academy and is a 2017 graduate of the former T.C. Williams High School. “One day I got in a fight at Charles Houston rec center and a staff member walked me into the gym and said to a trainer, ‘This kid is always getting into a fight. Can you do something with him?’”

Isley represented the U.S. in the Tokyo Olympics and was a bronze medalist at both the 2017 World Championships and 2019 Pan American Games.

“Boxing has always felt natural to me,” Isley said. “Growing up a lot of people didn’t have the same type of dreams that I had -- a lot of people who almost got there but never fulfilled their dream. But I want to let kids know there is another way out. If you dream big you can get there.”

Davis, whose sister Shanice Davis is a teacher at Patrick Henry, was a silver medalist in lightweight boxing at the Tokyo Olympics.

“I started boxing at 9 years old but got serious when I was 14,” Davis told the students. “But when I was your age there was a lot of temptation, a lot of things around me. I could have easily followed my friends in gangs but I’m telling you now don’t let your friends or anything else take you down that path.”

Both Davis and Isley said they hoped to inspire the school students.

“You all know what is right and wrong, what is good and bad,” Davis said.  “If I had gone down the same path some of my friends did I wouldn’t be here today talking to you all. A lot of times school is boring but at the end of the day it will get you to where you need to be when you become a man.”

Both boxers stressed the importance of discipline and to stick with their dreams no matter what others think.

“I never gave up,” Isley said. “I always kept the hope that I would make it, that I would be an Olympian from Alexandria. So remember to always be you. God will bless you for you.”