The history of abortion in Virginia has many twists and turns. 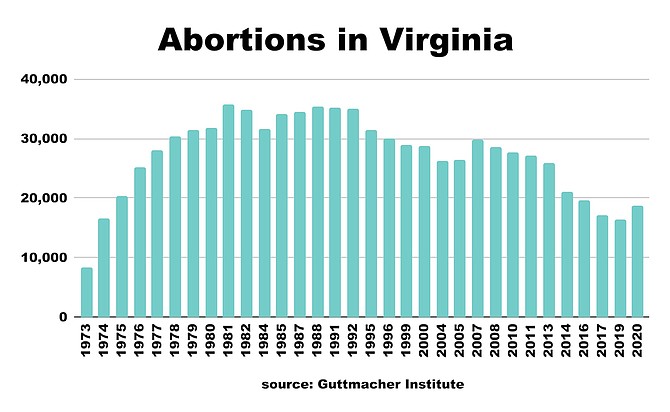 The United States Supreme Court's decision to dismantle the right to abortion has upended the discussion over reproductive freedom. The Virginia General Assembly is about to consider outlawing abortion, and Alexandria's commonwealth's attorney is vowing to not prosecute patients who seek abortions or the doctors who perform them. Meanwhile, advocates on both sides of the issue are gearing up for an epic fight.

But this is a discussion that's been going on for centuries, long before Roe versus Wade granted a right that's now been vaporized.

Virginia outlawed abortion in 1847, a time when the abolitionist movement opposing slavery was gaining steam. At the time, abortion was entirely legal in Virginia. When the Constitution was written, women were able to get abortions under British common law up until quickening, the moment in a pregnancy when the movement of a fetus becomes noticeable. By the 1840s, several states were taking action to outlaw abortion.

"In the 1840s, we started seeing this idea that abortion might be morally wrong and that life begins before the woman can feel it," said Joanna Lahey, a professor at Texas A&M who has researched the history of abortion laws in the United States. "And they started having these new kinds of anti-abortion laws that punished women and punished doctors who gave abortions."

She says it's no coincidence that the Virginia General Assembly took action as the abolitionist movement opposing slavery was gaining steam. The debate over slavery was often lurking in the background of all kinds of policy decisions from the era, including whether Alexandria should leave the District of Columbia and return to the commonwealth of Virginia. The importance of the slave industry to Alexandria was an important motivating factor for leaving the District of Columbia, which was increasingly becoming a hotbed of abolitionists.

"People are pushing against slavery, and you've got a whole lot of turmoil happening in terms of these views of, are people chattel?"

After World War II, law enforcement officials began stepping up prosecutions of women who solicited abortions and the doctors who performed them as well as the people who aided and abetted the illegal activity. In Fairfax County, Police Chief William Durrer went so far as to use secret listening devices to investigate women seeking abortions. His use of wiretaps became so controversial, he was asked to appear before the Senate Judiciary Committee in Washington to explain himself in 1966.

"We need this investigative aid in the fight against crime," said Durrer.

"No," Durrer replied. "The men go up a pole down the street somewhere."

"Do you furnish your men with burglar tools and lock picks like some of the federal agencies do?" asked Long.

By the late 1960s, opinions were starting to shift in Virginia. In 1966, Dr. Alan Guttmacher, a leading authority on birth control, told a statewide population conference that the time had come to be "more realistic" about birth control. He pointed out that aid for dependent children had increased 22 percent in the previous six years, and he argued that Virginia abortion laws should be liberalized. Gov. Albertis Harrison spoke at the conference, giving his stamp of approval to the effort.

"We have a simple message to get across, and that is that the size of any family is a matter for the individual to decide," said Gov. Harrison. "The alternative to planned and responsible parenthood is ultimately mass privation throughout the world."

At the time, abortion was legal only to save a mother's life. But the conservative Byrd Machine governor was adding his voice to those arguing that abortions should be allowed in cases of rape or incest. Colorado led the way with a law that created three-member abortion boards at hospitals to approve abortions if carrying the baby to term would cause permanent impairment of physical or mental health of the mother. The American Medical Association and the Medical Society of Virginia adopted resolutions supporting states to allow abortion in cases of rape or incest.

"This is a plea to do away with kitchen-table surgery done by ignorant dirty hands and to avoid the frightful deaths of young women at the early morning of their lives," wrote Dr. Christian Cimmino, a Fredericksburg physician in a 1969 editorial in Virginia Medical Monthly. "Perhaps generations yet unborn will look back on our present abortion practices as we look back on theocracy's witch-burnings of colonial times."

AS THE 1970s APPROACHED, momentum grew for Virginia to relax its strict anti-abortion law. The Virginia Federation of Women's Clubs and the Virginia Council on Social Welfare passed resolutions supporting "therapeutic abortions." Abortions were already legal to save the life of the mother. But now many organizations were pressing lawmakers to allow abortions in cases of rape, incest or when the baby would be born with physical deformity or mental deficiency. Richmond's director of public health said abortion laws should be "brought up to 1969 thinking," and the Virginia Advisory Legislative Council eventually made a recommendation that the General Assembly liberalize Virginia's 1847 restrictive abortion law during the 1970 General Assembly session.

"This bill as presented is a conservative one," said Del. Lester Schlitz of Portsmouth during the debate on the House floor. "This is a humane bill, not a radical one. The medical profession is almost unanimous in support of it."

A few years later, the Supreme Court struck down state laws that outlawed abortion. That decision declared Virginia's old 1847 law on abortion unconstitutional. A few years later, in 1975, the Virginia General Assembly took action to align its criminal code with the new Supreme Court decision. The bill was paired in a "gentleman's agreement" with a separate attempt to impose a mandatory death penalty in cases of murder for hire, murder of a kidnapping victim and murder by a prison inmate. Part of the argument for revising the criminal code is that a successful court challenge would leave Virginia with no abortion laws at all, potentially allowing laymen to perform abortions.

"The question is not whether we approve or disapprove of abortion," said Del. Ford Quillen of Scott County. "What we're trying to do is protect people."

In the early 2000s, Republicans were able to create several new restrictions on access to abortion. In 2001, they required a 24-hour waiting period for abortions In 2011, they required abortion clinics to meet hospital construction standards including the number of parking spaces available and the width of hallways. In 2012, they requiring an ultrasound at least 24 hours before receiving an abortion. All of those laws were repealed in 2020 when Democrats took the majority and passed the Reproductive Health Protection Act.

"No more will legislators in Richmond, most of whom are men, be telling women what they should and should not be doing with their bodies," said Gov. Ralph Northam at the time. "The Reproductive Health Protection Act will make women and families safter, and I'm proud to sign it into law."

Now Virginia is the only state in the south where abortion is available via telehealth. Patients can consult with prescribers virtually and receive pills by mail early in pregnancy (up to 77 days since the first day of the last period).

Meanwhile, Alexandria Commonwealth's Attorney Bryan Porter was one of nine Virginia prosecutors to sign a letter saying he would not prosecute patients seeking abortions or the doctors who perform them.

"Our criminal legal system is already overburdened," the letter said. "Enforcing abortion bans would mean taking time, effort and resources away from the prosecution of the most serious crimes — conduct that truly impacts public safety."

History of Abortion in Virginia